I have an odd relationship with money. Often I feel that I’m beyond it or above it. I focus on the pursuit of happiness over the pursuit of wealth. At other times though, I think maybe these are stories I tell myself because I have deep-seated fears or misconceptions regarding wealth.

The truth is, I’m not sure if my attitude towards wealth is incredibly wise, or incredibly stupid.

I know that I’m not making as much as I could if, for instance, I were to focus more on promoting Gingko as-is, and less on creating Gingko as it ought to be. On the other hand, I’m very happy most days, so I must be doing something right.

In any case, since I don’t fit into either the “Profit profit profit” camp, nor the “Money is evil” starving artist category, I do a lot of thinking on the subject. In particular, I try to argue both for and against wealth as a goal.

Here’s an argument that occurred to me, in favor of wealth:

Money is a way to travel into the future.

The Wealth of Middle Age Kings,
The Average Citizen of 2015.

Do you realize that the average human being today has more “wealth” than the richest kings of the Middle Ages?

We don’t have castles and acres of perfectly manicured land to call our own. But here in Montreal, my average income family is a few blocks away from the Botanical Gardens, which is free most of the year, and affordable for residents otherwise. It’s as beautiful as any castle grounds, with far more variety, tended by thousands of expert gardens. And I have essentially unlimited access to it.

We don’t have our own personal cooking staff. But we can walk into a good restaurant and be served like the royalty of old. We can have fresh food from anywhere on the planet delivered to our door from the nearest grocery store (many foods that simply weren’t available to Kings of old, no matter how wealthy).

If we forget about comparing what Middle Age Kings had, and focus on what they didn’t have, we see that our own average wealth today far exceeds anything a king could even have imagined then.

We have all the world’s information accessible to us in our pockets (along with instant and free intraplanetary communication, music, games, and videos, GPS, translation software, etc). Any average person can receive better health care for free, than the best that was available even to the richest a hundred years ago. For less than a hundred dollars each, my family obtained a complete genetic profile from 23andme.com, giving us detailed ancestry and custom medical information.  We can travel the other side of the planet, in less than 24 hours. Most importantly to me, it’s becoming possible to live a life of comfort and ease, doing only what you love, wherever on the planet you happen to be.

Kings of old would have raised armies and fought wars over powers the average citizen today takes for granted.

It’s astounding the knots we twist ourselves into to have more and more,
when we already have so much.

This is not a new realization, and it’s been written about many times before. What I only just realized, is that it goes the other way too. 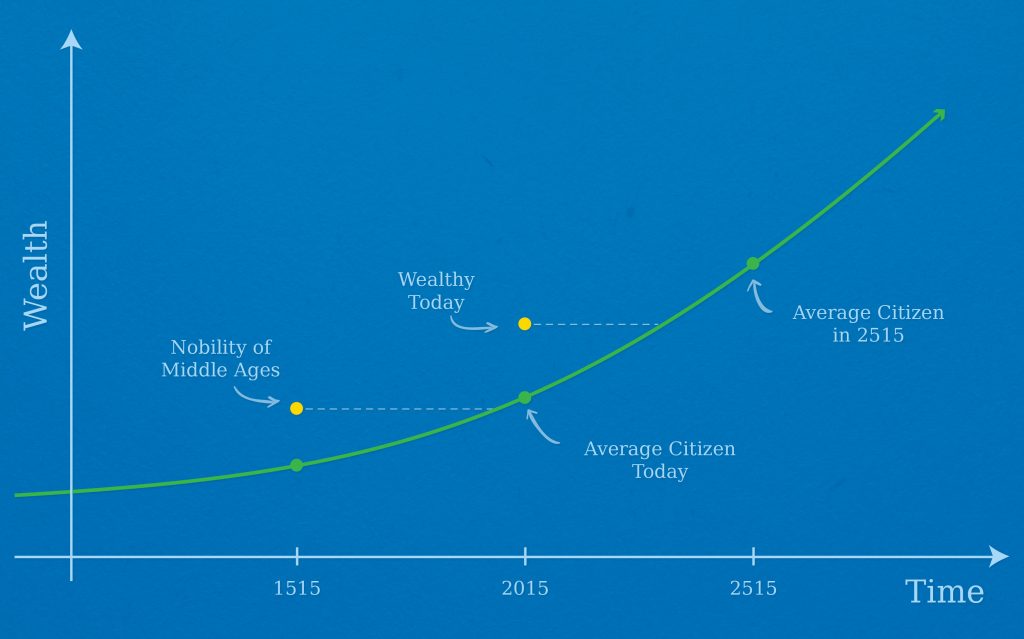 The Wealth of Today,
The Average Citizen of 2515.

What can the wealthy today have, that the average citizen can’t?

There are the obvious markers of wealth. A large home on a 5 acre property, fine clothes and jewelry, luxury cars, etc. There’s no need to go into much detail on this, because it seems that we are bombarded by images of what more money could bring. The wealthy can have more, and can do more. They can choose to work, or not work. They can travel in absolute luxury. And so on.

Besides the better versions of what’s available to the average citizen, they have priority access to emerging technologies. They will have access to space flight. To advanced robotics. They already have access to prostheses to replace missing body parts, but they will also be the first to have access to advanced implants that simply enhance what we already have.

In other words, the rich have access to the future.

And as with the comparison of Middle Age Kings to today, the biggest increase in wealth will be in objects and powers that we simply have not yet imagined yet.

A Question of Distribution

It’s clear that wealth leads to access to the future, but the mind balks at the idea that all humans will have access to what only the wealth can access today. Why?

In reading and researching for this article, I came to understand a critically important point. We’ve been conditioned over centuries, and especially in the last few decades, to believe that we are living on a planet of scarce and limited resources. We believe that the world is only going to get more crowded, resources rarer, and the gap between the rich and poor will only widen.

But that’s simply not true.

While the physical resources of the planet are finite, there are two things that seem to have no bounds: energy, and human ingenuity. There is nothing we can’t do with these two things.

We’ve seen that we have more wealth now, on average, than a King of the 1500’s. And this “despite” the fact that the population increased from 500 million then to 7 billion now. But it’s actually more than that:

We’ve increased our wealth over the centuries,
not in spite of increasing population, but because of it.

Think of it this way: human beings in prehistory were barely able to survive. It’s only through agriculture, specialization, trade, and other phenomenon that emerged out of a growing global community, that we were able to escape that continual poverty.

We can’t imagine a future of immense wealth, because we believe that we are living on borrowed time. That it will “all run out” and we’ll be fighting for the scraps that remain.

To get a sense of how big the gap is between our sense of scarcity, and reality, consider this: there’s no real reason why we can’t all have a large home in a 5+ acre property. Yes, you read that correctly. A 5-acre home for every family on planet earth.

10 billion people, living in families of four, could each have 6.4 acres of land on Earth.

What about food? There’s enough arable land in just the Guinea Savannah of Africa to feed the entire planet. We’ve been growing more food on less land for centuries, and it’s only set to increase.

The Root of All Evil: False Scarcity

If our resources are not limited, then why is there so much poverty and struggle in the world?

It’s simple: it’s because we believe our resources are limited. We could argue that this false sense of scarcity causes or contributes to almost all of the world’s problems. Wars, poverty, the mass production of useless junk for profit, the enslavement of the middle class in 9-5 jobs, and the eternal stress of competition.

It comes to this:

Most of the world is living as if in famine,
fighting and squabbling over an infinite banquet.

We only have to wake up to the abundance that surrounds us, to stop competing for scraps, and focus on creating a better world.

6 thoughts on “The Wealth of The Future”