The Desktop version of Gingko is nearly ready to be launched!
You can find it on the new homepage, here:
https://gingko.io

Here are some of its features:

And here is some of what’s still missing:

It’s been a long road, but I’m happy with how it’s turned out. It might not be much different to look at, but it’s been rewritten in such a way as to allow much more powerful features to be built in the future.

Check it out, let me know what you think, so I can iron out the last few bugs before announcing it to everyone on the full mailing list.

I received a couple emails in a row asking if Gingko was “still active”, despite putting out what (to me) is quite a lot of updates… I realized that they’re all over the place, but not here on the blog.

I’m most definitely still here, working hard and full-time on fixing bugs for current Gingko, and developing the next version (Desktop + web). Most updates for that take place on the community forums.

You can follow me on Twitter, as it seems to be the platform I’m most active (though still, not that active). http://twitter.com/gingkoapp

I also started posting videos on YouTube, and will continue to do so, once our schedule returns to normal. For those who aren’t aware: my wife and I both work from home, and homeschool our 4.5 yr old son. He’s normally with us five days a week, and with the grandparents the other two… except for the last couple months when we’ve had him 6 or even 7 days a week.

So, that’s my mini update. I’m trying to be more visibly active, and I need to get over perfectionism in order to do so… working on that daily! 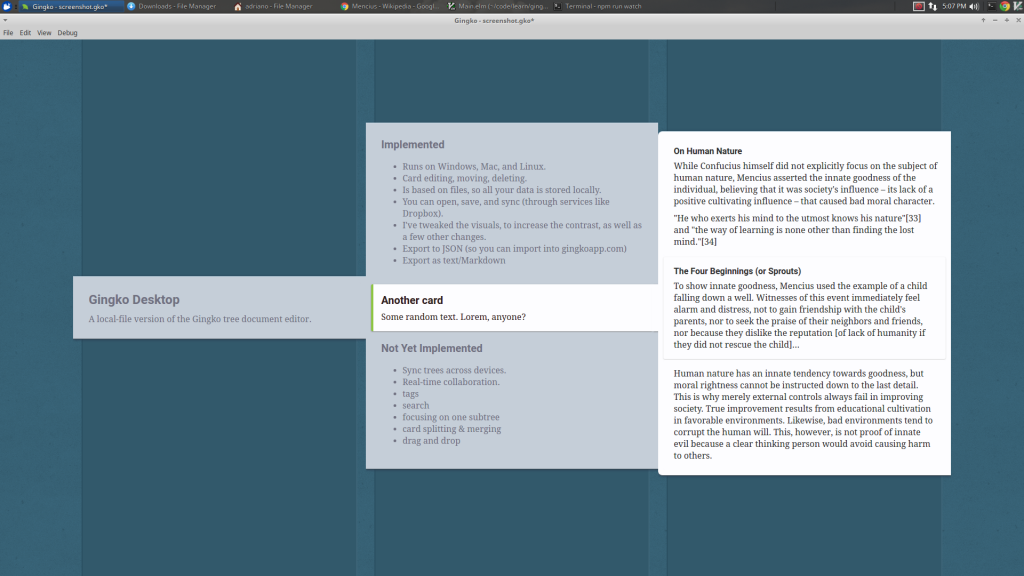 Here are a few quick facts about it:

What it can’t do yet is:

I need volunteers willing to test it on various platforms.
If you’re willing to try it out, please sign up at the form above.

I’ll be making wider announcements as I continue to iterate on this.

I’ve decided not to pursue the Kickstarter Open Sourcing at this time. There are a number of reasons, but the most important is that it would mean a very long time before Gingko would start improving again for you, the user.

I had been working on the campaign for weeks, and still hadn’t completed the script for the video. After that I would have had to create the visuals to accompany my voiceover, edit it all, write all the campaign copy, write a newsletter. Then, once running, it would have been a month where my entire focus was on pushing the campaign, overriding both my ability to provide support, and the time I’d need to ship improvements. Assuming the campaign succeeded, it would then take significant work to make Gingko open source (I’d have to restructure the code, make it easier for others to install, document it fully, and much more). And in the end, it’s only a hypothesis that open sourcing would lead to a faster improvement cycle eventually… that’s something that depends heavily on random factors.

So, on the one hand, even assuming success (not guaranteed), it’s months of work, for very little actual return for you users. I still believe Open Source is a good direction to move towards. And I would like more collaboration. But it’s not time for this yet.

On the other hand, the work that went into the campaign isn’t a waste. I was reminded of the many exciting and powerful features that I had dreamed of implementing. And it’s made me rethink and clarify my priorities. What came out on top was this:

Make great software… everything else is a distraction.

For the last month, I’ve been working on a collection of features that combine both the most frequent request I’ve ever had (a true, download to your device(s), offline capable Gingko), with other changes that people haven’t asked for ever, but I believe will make Gingko far more powerful than it is now. It’s the greatest coding challenge I’ve ever undertaken, but it’s going well, and I’m making progress every day on it.

If you were excited about open source Gingko, I will mention that I am for it in principle. But I’m wary of big and irreversible change, in a direction I’m not experienced in, when it’s not clear that it will be for the better. Instead of open sourcing to everyone, all at once, I will instead be willing to take on “semi-open” collaborators as bandwidth permits. If you are yearning to hack Gingko (for the benefit of everyone and not just your own niche use-case), get in touch with me. If we’re a good fit, I will give you access to the code.

These days, I’m coding 100% of my working time (sometimes forgetting to eat lunch, which I don’t recommend). Customer support happens in pockets of time on my evenings and off days. And I’m loving it. I feel both relieved and excited about moving forward. An excitement I haven’t felt in years.

When I can, I will post specifics of my progress so far.

PS: I added Copy/Paste to Gingko a few weeks ago. You can now hit Ctrl+C to copy a subtree, and Ctrl+V to paste it. It’s a little slow, but it works.

Gingko is, and always has been, small, self-funded, and profitable. It continues to grow steadily, via word of mouth alone.

But I’ve reached the limit of what I can accomplish alone. For a long time, I believed I faced a tough choice:

Each had its attractions, but none are ideal. But, towards the end of the 5 month journey I took with my wife and son, I realized another option: “sell” Gingko to the world. Open-source Gingko, but raise a buffer to support both my current users, and my family in the transition. Bring Gingko, and its vision, to a wider audience.

So, here’s what’s in store:

I’m creating a Kickstarter campaign to accomplish several things at once: END_OF_DOCUMENT_TOKEN_TO_BE_REPLACED

6 months ago, myself, my wife, and our then-2-year-old son, sold many of our possessions, packed what was left into a 5′ x 5′ storage unit, and set off for Spain, Kuwait, and Sri Lanka.

We have stayed in 21 different places over this time, ranging from a luxury hotel in the center of Madrid (on deep discount, of course), to a night “sleeping” on the floor on the grounds of a church in Sri Lanka. All told, the trip cost us little more than rent & utilities would have, had we stayed.

As you might imagine, we are very happy to be back in Canada. We’re settling next week into a nice 2 bedroom apartment we’ve found to rent in the suburbs of Ottawa-Gatineau.

There were times during the trip where I let some things slide, mostly email and this blog. For that, I’m sorry. But at no point was I out of reach for anything major. Gingko as of right now has been up continuously for 3,361 hours, and only had 4 minutes of downtime in 2016.

Most importantly, for readers and Gingko users: I’ve had a lot of time to think during this trip. And more than time, I’ve gained some perspective on what matters. This perspective has given me a way forward for Gingko that I’m very excited about. While I can’t reveal much yet, watch this space for announcements.

Today, Tuesday Oct 7th, Gingko was been down for a 2 hours.

I’ll post back when I do a complete post-mortem, to find out what caused this, and how to prevent it.

Rest assured all your data is safe.

In fact, early indications are that the cause of this is that I may have been too eager with our backups: both a full database backup and a complete disk image backup were scheduled to run at the same time!

Gingko is now out of beta.
We are now Gingko 1.0

It’s been a long road. And as a two-person, self-funded, very-distributed team, we are definitely taking the “road less travelled”.

Since we’ve opened up, we’ve received many new users, and more great feedback and suggestions.

We are excited, and our journey has only just begun.

The gingko prototype has been completely rebuilt. It now rests on solid foundations, and has full real-time collaboration.

It’s been a long difficult path.

Aleksey and I had to learn how to work together across 10 timezones, though we’ve still never met. We had to work through my sleepless weeks following my son’s birth. I had to work on my PhD as well, since it’s so close to completion.

And never once was quitting an option.

Gingko is my life’s work,
and one way or another,
I will make it grow into what it needs to be.

Now, we can look outwards, to you.

Our goal is to make it possible for you
to focus on your life’s work,
whatever that may be.