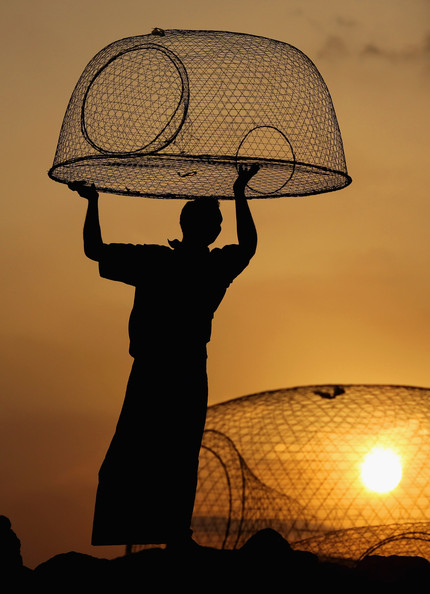 In Kuwait, where I grew up, one can still find local fisherman using funnel cage traps. I used to watch them throw their cages into the sea, and found myself wondering about the funnel.

“How wide does the mouth need to be to capture enough fish?”
“How narrow does the funnel end need to be to keep them?”
and finally, “I wonder what it feels like to be the fish?”

Recently, I had a chance to find out.

I came across an online version of one of these traps, and became the fish being funnelled into it. I was fully aware of it, but I kept going deeper into the sales funnel because I wanted what was inside: a productivity program I had been interested in for some time.

I did end up purchasing a trial, but it was entirely in spite of the funnel, and not because of it. I purchased because I believed in the creator’s work, his vision, and his product; all beliefs I had held from material I had seen outside the funnel.

The sales funnel is the way we usually discuss, visualize, and track online marketing. This model is so prevalent and unquestioned, it is very likely that it lies underneath all of your marketing efforts. It might even be the reason why you hesitate to market in the first place, as it is for me.

Holding this model in your mind is damaging to your customers, to your business, and to you.

The funnel treats people as indistinguishable data points, and leads to a single path to sustainability: burn a large amount of fuel, get as many page views as possible, convert as many as those into leads, and keep shoving people through the funnel until the numbers work out and the system runs on its own.

This is what I call
the “Ramjet” model of marketing.

It works very well in a few narrow situations, but utterly fails in the ones that matter most to you.

I’ve been exploring an alternative mental model that works no matter your level of funding, your scale, or your market. And most importantly, it flows naturally from you, and doesn’t require you to join the life-draining shouting match that is advertising.

Let’s first look at how the sale funnel model works.

First, you need an intake wide enough to capture the customers you need to survive. Then you need to plug all the gaps in the funnel, even if it means being slightly sneaky about things (disabling navigation, hiding content behind opt-in forms, etc). You also need to move fast enough to have enough people coming in at the top to continue fuelling forward motion. And finally, you need to spark powerful emotions at the right time, by whatever means necessary,  to make a sale. There are only two ways to sustainability: get bigger, or move faster.

A ramjet is a kind of engine that can move incredibly fast, once it hits a particular velocity. It can do so because it uses its forward motion as part of the thrust process. This is efficient, but it has a number of drawbacks.

A ramjet only works at high speeds. Which also means it needs assistance to take off. The stresses involved are very high, the body needs to be extremely lean. There is no distinguishing characteristic of the air entering the engine… we just need a lot of it, very very fast. Ramjets are expensive to test, because you can only find out if they will succeed once you’ve hit supersonic speeds.

The only way to find out if a ramjet works is to propel it with an external engine, hurl it through the air, and see if it flies, or if it explodes.

If you’re in startups, this might start to sound a little familiar.
Try these substitutions:

A startup based on the ramjet model is a very stressful place. Sure there’s an adrenaline rush, but it’s very much shaped by the requirement to get to a certain scale and speed in order to function properly. Once there, it’s a beautiful piece of human engineering. And the model can reach breathtaking speeds/profits.

However, is it any wonder that 9 out of 10 of these ramjet startups crash and burn?

In a ramjet startup, there is constant pressure for more volume, plugging gaps, and getting to the point where the engine runs itself (often requiring several stops of refueling/refunding).

The lean startup cult is just a scale model version of this.
Sure it’s smaller, but the principles and the mental model is the same.

“Will it fly?” is still the primary question.

The key drawbacks of this model are:

It’s time to put an end to the ramjet model of business.

In common language, when something “resonates” with you, we say it “speaks to you”, reflects you in some way, or is somehow “aligned” with who you are.

In a rare occurrence, the physics definition of resonance is the same. A deep understanding of resonance leads to a far more powerful mental model for marketing.

The goal of marketing is simple, but a concise statement eluded me for some time.

Ideally, marketing connects the value you create with everyone who would derive a net benefit, and with no one who wouldn’t.

Let’s imagine every one of us is broadcasting ourselves into the world. Every time we speak, write, share, or create, we are emitting a part of ourselves into space, for it to be received by someone else.

What are the aspects of these signals that we can tune, in order to achieve maximum reach with minimum energy and waste?

Every oscillating system, whether it’s a pendulum, a swing, a tuned radio circuit, has its own natural frequency.

If you try to force the system at an other frequency, the system will resist you. If however, you give the system the slightest nudges at the natural frequency, it will respond powerfully.

The first and most important step, is to decide what signal you’re broadcasting, and make sure it resonates with you. You have your own natural frequencies as well. The language you use, the things you’re drawn to, and the values you hold, all form the spectrum of your being.

When you speak, write, and create in a way that resonates with yourself, broadcasting becomes effortless.

[A system] will easily vibrate at those [natural] frequencies, and vibrate less strongly at other frequencies. It will “pick out” its resonance frequency from a complex excitation, such as an impulse or a wideband noise excitation. In effect, it is filtering out all frequencies other than its resonance.
– Acoustic Resonance, Wikipedia

In order to be heard above the noise, you don’t need to shout louder.
You just need to resonate with your audience.

But resonance isn’t solely about finding your natural frequency.
Focus is as important.

There is no such thing as a perfect frequency. It’s physically impossible to create. Every signal has a spread, and so we need a way of quantifying that spread.

The “quality factor” is a measure of how focused a signal is around the resonant natural frequency.

A crystal glass, a bell, and a tuning fork all have high quality factors. It’s what keeps them ringing long after they’re struck. Radio signals also have quality factors (often called “bandwidth”).

There is a trade-off here.

If the quality factor is extremely high, then the signal can be received many km away, but only if the receiver has precisely the same frequency. If the receiver is simply scanning the band, it’s very likely to miss your narrow broadcast.

On the other hand, if the quality factor is low, your signal starts to blend in with neighbouring signals, your broadcast energy is spread thin, and you need a lot more power to reach the same number of people.

How narrow should you go?

Far narrower than you’d expect. The only way to cut above the noise is to resonate very strongly with a very small number of people. Your signal is then amplified by them, and will reach more people with the same narrow frequency.

If you go too broad, however, your message is filtered out by everyone equally, and just passes through without affecting anyone or anything. It leaks out into space as wasted energy.

You can have the most powerful, most focused signal on Earth, but if you’re broadcasting in a lead box, it’s just going to bounce around you and go no where. Probably frying you in the process.

Your signal has to overcome the natural barriers that exist in the world.

This is simple, but it can be overlooked. You need to place your broadcasts in the channels that are likely to reach your resonant audience. But while it’s important to avoid being in an echo chamber, it’s a waste of time to try to maneuver your signal around every single obstacle.

In other words, make sure you can be found by search, using search terms that resonate. Choose one or two social media outlets. But don’t waste your time trying to optimize your SEO, and your social media presence in 6 different outlets. It dissipates your limited energy.

Your goal is to be findable.
Resonance and quality should do the rest.

Amplitude, or how much power you’re putting into broadcasting your signal, is the last thing to tune.

With the ramjet, you need to pump power into the system, get it up to a certain scale, before you do anything else, in the hopes of tuning it mid-flight until it works. When you look at this approach with a signal mindset, however, the futility is striking.

There is nothing more wasteful than to pump a great deal of energy into broadcasting a message that will resonate with no one.

A World Of Broadcasts

I don’t have a television, and my browsers have ad-block. So every time I come into contact with the “normal world” of commercials and ads, it’s jarring. Why do we tolerate this noise?

It is a distraction based economy, one that rewards the biggest and loudest players. They play to our lowest selves, by bypassing our consciousness and reaching into our lizard brains, our base instincts.

The ramjet model plays this game very well. We get sucked into the engine, and have no choice but to try to escape, or be forced out the other side, sometimes with less than we came in. It’s these images as modes that give marketing a bad name.

But if we change our perspective,
marketing becomes a beautiful thing.

It’s a world of broadcasters and receivers, each resonating in tune with each other, amplifying each other. It’s a world where people don’t need to shout, they just need to create, refine, and share.

So which would you rather be,
a ramjet operator, or a resonant signal?

2 thoughts on “Marketing: Ramjets vs Signals”